About us Clean system partner Sponsorship and charity History

You are now redirected to our German dealers' website.

History
About us Clean system partner Sponsorship and charity 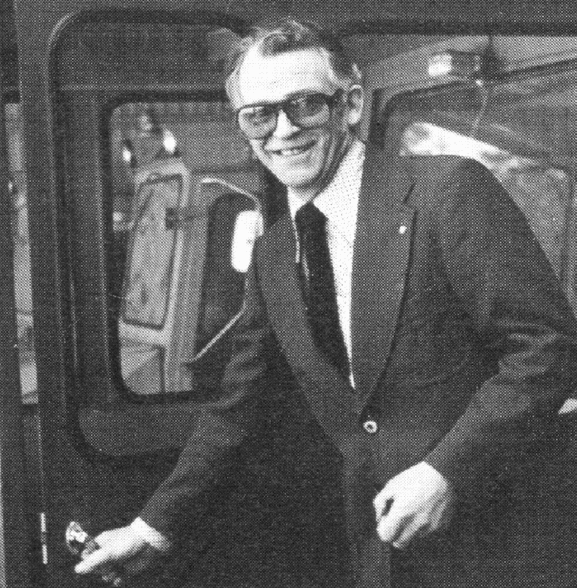 Since John Sonerud and his brother Gottner founded Sonerud Brothers Machine Agency back in the 1950s, the business has seen quite a few changes.

Their business concept was to act as intermediaries between buyers and sellers of second-hand agricultural machinery, fodder and other goods. By the mid-1950s, they had extended their range to include power saws, fridges, freezers and briefly also television sets. Freezers were delivered by rail and then collected by the customers themselves at the station, taking them home on their tractors and trailers. The brothers even imported second-hand Ferguson tractors from England.

In 1957, Gottner and Erik left the company and John founded Soneruds Maskin AB. At the end of the 50s, farming was not very profitable in Sweden and sales of agricultural machinery fell accordingly. John therefore decided to start selling the Hymas, a Norwegian tractor with excavator arm, instead.

It may not have been very comfortable for the operator – it did not have a cab – but all-round visibility was excellent. Sales of the Hymas excavator proved to be so successful in Sweden that John Sonerud, together with three Norwegian partners, established a Swedish Hymas subsidiary in Hudiksvall in 1959. 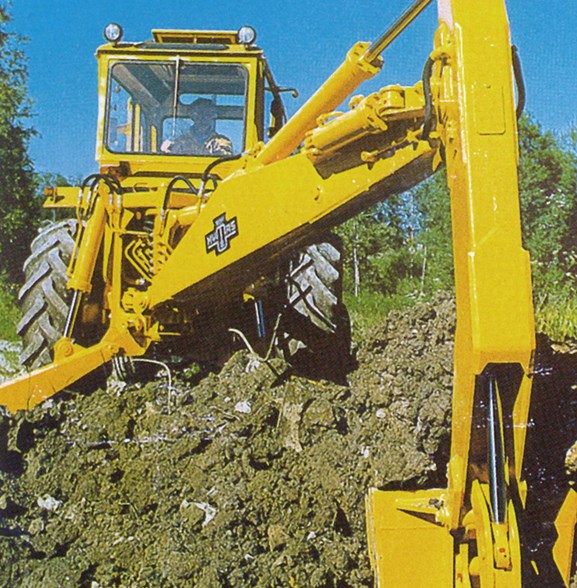 In the first year they built 75 of these models. The excavators were sold by several distributors located across the country, one of which and indeed the most specialised was Sonerud’s company. John Sonerud then decided to buy out all the Norwegians’ shares in the business, making him the sole owner. In the period from 1974 to 1979, the company made 600 machines annually. To keep pace with expansion, new manufacturing facilities were built in Hudiksvall in 1967 and 1973.

Under John’s innovative leadership, new products and improvements were constantly being launched. They are what put Hymas in a class of its own on the Swedish market. Smooth excavator booms and mechanical quick couplers are just some of the many innovations rolled out in the mid-1960s. And they still remain key components in most Scandinavian backhoe loaders today.

As production volume increased, John Sonerud decided to sell Hymas to Karolin Invest in Skellefteå in 1972. John remained its CEO until 1977, before moving to the parent company: Soneruds Maskin AB. By this time, Soneruds had already become firmly established as a distributor on the excavator market in central Sweden.

When John started working for Soneruds Maskin AB in 1977, his son Åke also joined the company. They built a new factory in Hudiksvall’s western industrial estate and began developing and manufacturing a self-propelled sea tipper vessel called the Sea Dump. A total of 40 Sea Dumps were sold. Most of these went to Scandinavian countries, but some were also shipped to Germany, Australia and Sri Lanka. However, given that the market for the product was very limited, it went out of production. In 1977, John Sonerud received the Sundsvallbank enterprise award for his services to the industry.

Over the period from autumn 1978 to winter 1979, Soneruds Maskin AB was turned into a development and sales company with the focus on its own patented accessories for backhoe loaders and excavators. As a result, manufacturing was no longer carried out in house, but outsourced to local subcontractors. At the same time, sales of Hymas products were discontinued.

The first product was the Grab John, an excavator bucket with an integrated, hydraulic grapple. It was launched in spring 1980 with great success as a bucket for installing utility poles. In the same year, John’s son Åke became the company’s CEO. At the beginning of the 1980s, a complete range of Grab John buckets was developed for excavators up to 35 t. With its built-on grapple, the Grab John is a highly versatile tool that combines the functions of an excavator bucket, grab (grapple on the excavator) and hydraulic quick coupler for special Grab John models.

Based on the Grab John bucket, a number of unique solutions were developed and marketed for mechanical pipe laying, mechanical utility pole installation, cable trenching, mechanical rock drilling, etc. Special Grab John tools that can be attached and held in place with the grapple on the Grab John were also developed, such as rippers, layers for concrete pipes, drilling rigs, vibrating cable ploughs and rubber-coated grab adapters. Such was their success that the Grab John soon became an international product.

In the late 1980s, 45 per cent of the products manufactured were exported to various West European countries, while over a hundred buckets were made under licence in Japan. All in all, over 3,000 Grab John buckets were supplied to satisfied customers across the world.

As early as 1989, Soneruds realised there was a demand for a complete solution, enabling a quick coupler to be used with excavators and wheel loaders to connect and disconnect hydraulic attachments automatically from the operator’s cab. Mechanically and hydraulically operated quick hitches were increasingly becoming standard for excavators and wheel loaders in Sweden. The option of also being able to change hydraulic tools automatically from the cab was therefore the next logical step in development. Soneruds then took the decision to develop a hitch with an automatic hose quick connector for backhoe loaders. However, there were unforeseeable delays in the project.

It was not until spring 1993 that OilQuick’s first quick coupler for backhoe loaders was launched on the market. At the same time, the company presented an OilQuick solution with quick couplers both above and below a Rototilt. Unfortunately, the market was not yet ready for such products at that time. Although John Sonerud died in 1994, his successful innovations, smart solutions and entrepreneurial spirit live on in the company.

Spring 1996 saw the first customer taking delivery of the OilQuick solution for wheel loaders. Stena Returpapper, a paper mill in Hudiksvall, used the system on a Volvo L50. Until then, they had changed between a bucket and a hydraulic bale clamp around twice to five times a day. Once OilQuick had been installed on the wheel loader, operations became much easier and suddenly hydraulic tools could be changed 7 to 15 times an hour! It goes without saying that the company was delighted with the new system. A year later, the first OilQuick system for fork lift trucks was launched.

In late 1996 and early 1997, there were two new share issues. This provided Soneruds Maskin AB with financial strength and enabled it to continue investing in product development and marketing the OilQuick concept. Soneruds shares were listed on the stock exchange. In 2001, the Sonerud family once again became the sole shareholders in the company and delisted the shares.

In 2002, the company celebrated its 50th anniversary and at the same time changed its name to OilQuick AB. The fact that the company and its products then bore the same name helped to successfully develop the brand and improve the corporate profile. Changing the name also paved the way for the planned expansion on the international market.

During the 2000s. the company continued its intensive development work and unveiled several new products. The OQS system for material handling machines was rolled out in 2001. It enables operators to switch between scrap shears and the handling stick in a matter of seconds. The following year, OQC 60 was presented, a quick coupler system for suspended attachments used with material handlers. At BAUMA, the construction equipment trade fair in Munich, Hitachi demonstrated the OQB 125 boom-mounted quick coupler on a 50 t demolition excavator in spring 2004. The same year, the OQ 120, the largest fully automatic OilQuick quick coupler for excavators from 70 to 120 t went on sale.

After several years of product development, the TX45 M, a quick coupler system for truck-mounted cranes, was launched in autumn 2005. This product is sold exclusively by HIAB AB. In 2008, the company built new premises in Hudiksvall. OilQuick then marketed its own tiltrotator for the first time in 2009. What made it unique was that the tiltrotator combined with the OilQuick system could be released automatically from the cab within a few seconds – using the same principle as for the quick coupler. In collaboration with Genesis Europe GmbH, another innovative product, the OQB 180 boom-mounted quick coupler, was developed and launched in 2010.

At the end of 2008, the company moved into its new premises at Hede-Finnflovägen in Hudiksvall. Covering an area of 2,200 square metres, the modern building was an important step in enabling further expansion.

Major order from the Swedish Army and certification to ISO 9001

In 2011, the Swedish Defence Materiel Administration (FMV) ordered a large number of Volvo wheel loaders and excavators for international missions. All the excavators were equipped with OilQuick’s fully automatic OQ 70 quick coupler, while most of the wheel loaders were supplied with the OQL 300 quick coupler. In the same year, the company was certified to ISO 9001.

In February 2012, Henrik Sonerud became the new CEO of OilQuick. His father Åke thus handed over management of the company to the third generation of the Sonerud family. In June of the same year, the company celebrated its 60th anniversary.

At the end of 2014, OQ LockSupport was rolled out, an electronic system giving the operator a user-friendly tool for changing work attachments on excavators safely and securely.

In autumn 2014, the company decided to start making strategic components in-house in the future. This led to an investment of over 60 million Swedish kronor from 2014 to 2017 in the building and machinery, including welding robots and machining centres. Its objective was to build a highly efficient, world-class manufacturing facility that will also ensure the company remains competitive in the future.

Optimistic for the future

By 2021, more than 40,000 OilQuick systems had been supplied to satisfied machine operators all over the world. The company will make every effort to strengthen its leading position as a manufacturer of automatic quick coupler systems and is committed to continue growing and delivering excellent results in the coming years.